What is Obsessive-Compulsive Disorder (OCD)?

In day-to-day conversation, likely you have heard someone use the term OCD out of context to describe wanting things to be a certain way, for example: “I am so OCD about organizing my closet,” or “They are so OCD when it comes to planning, why can’t they just relax?”. Or maybe you have heard things like, “I’m obsessed with that movie; it’s my favorite!”

Despite its frequent use and even misuse, obsessive-compulsive disorder is a mental health disorder that affects people of all ages, gender, ethnicity, sociodemographic, etc. It is significantly more intricate than wanting things a particular way, needing structure, or liking something a lot. Contrary to some misconception, those with OCD typically prefer NOT to perform the compulsion and often recognize that the obsession is irrational.  Those afflicted experience intrusive thoughts that either result in the need to complete an action or repeat it in their mind repeatedly, thus causing a great deal of discomfort.

Obsessions are typically thoughts, images, scenarios, or impulses that pop up and sort of repeat play. Many reports that these thoughts are entirely out of their control and are often disturbing. These ideas are typically rooted in fear, shame, discomfort, disgust, and doubt and often leave the person unable to move on with their day. Most people experiencing this can recognize that these thoughts are irrational. Common obsessions include:

Compulsions are repetitive, almost ritualistic behaviors completed to appease the obsessive thought and either neutralize it, lessen its intensity, or temporarily make it go away. Despite recognizing that these tasks or actions don’t make sense, individuals with OCD will continue because they lack alternative coping methods and may even avoid any situation triggering an obsession (i.e., avoid the subway for fear of germs). Common compulsions include:

According to the International OCD Foundation, somewhere between 2 and 3 million individuals in the United States are currently affected by obsessive-compulsive disorder. Despite this, significant causes remain unknown. Research suggests that OCD can run in families and genetics play a role, and stress can also exacerbate symptoms. Risk factors that increase the likelihood of OCD include depression, past trauma, anxiety or tics, or physical differences in the brain. Obsessive-compulsive disorder can manifest itself in a few other related conditions as well, including but not limited to the following:

There is no “cure” for Obsessive-Compulsive Disorder; however, the use of psychotherapy utilizes several techniques that have shown evidence of decreased discomfort of symptoms. Cognitive Behavioral Therapy helps work through some of the thinking patterns associated with obsessions and compulsions. At times, exposure therapy is also incorporated into treatment to desensitize triggers and learn to manage compulsions at the moment. Mindfulness, meditation, and other relaxation techniques can also effectively reduce the discomfort around OCD symptoms. Medication is also often used in tandem with these techniques to help control obsessions and compulsions.

In situations where a person is medication-resistant or needs more support, additional options include Ketamine infusions. For those concerned about the side effects of medication or are medication resistant, Ketamine is a great option to lift anxiety, is fast-acting, and can even incorporate Psychotherapy during treatment. For more on this, check out Senior Associate Caroline Brown’s two-part series on Ketamine Assisted Psychotherapy. 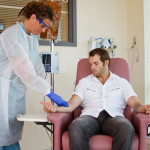 The Truth About Sexual Abuse: Prevalence and Risks: Part Iblogs
Call Us